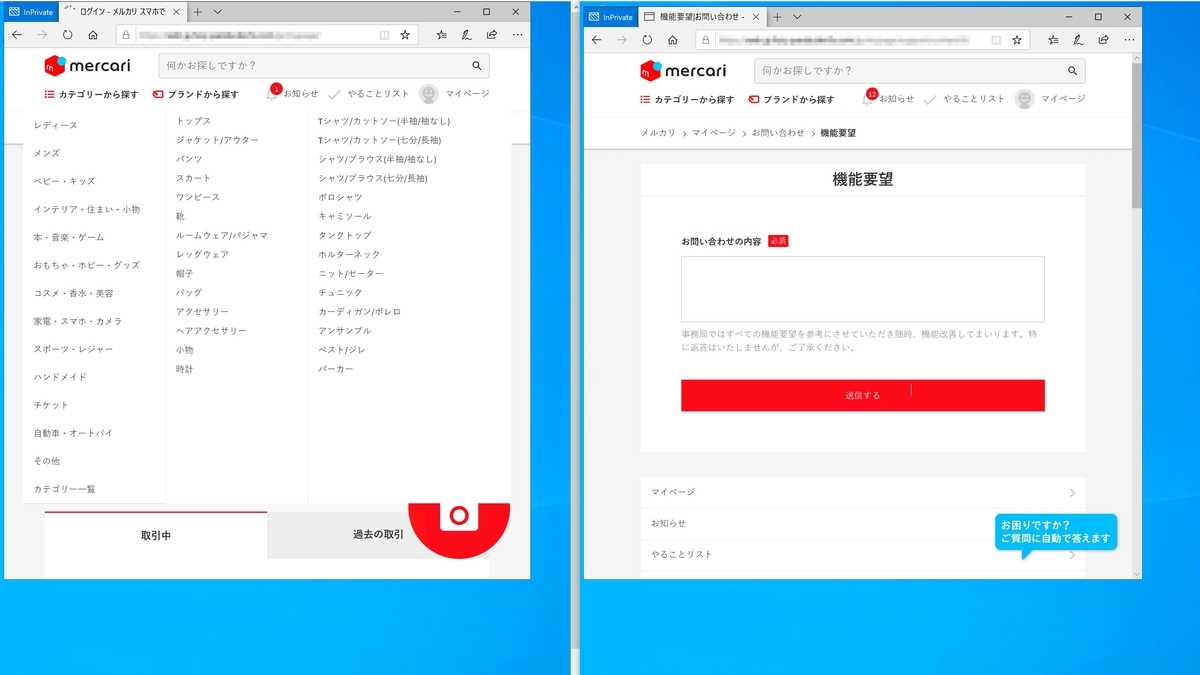 Note: This is a translation from the Japanese article.

Currently, I am working on UI test automation for Mercari’s web version.

This time, I would like to talk about UI test automation (Selenium WebDriver) with Microsoft Edge browser, and the testing environment for it.

Previously, I created UI test automation environment using Azure Kubernetes Service / Selenium Grid (I will write about this in another article).

For UI tests, creating the testing environment may be more complicated and it takes more time for execution, compared to tests at other layers.

We solved the above problem by running an appropriate size of UI tests on Azure Kubernetes Service / Selenium Grid.

However, because docker-selenium’s docker image is used in the above environment, tests could only be run on Chrome or Firefox browsers.

As you can see from the chart below which shows the web browser market share, there are many people who use Safari / Microsoft Edge browser.

Up until this point we had implemented and UI tests using WebdriverIO, as Safari and Microsoft Edge browser had support for it.

However, there is a limit to how far you can go trying to run all the tests on all of the platforms all the time.

The main reason for this is that Safari / Microsoft Edge both have a few restrictions on supported OS / environment.

These restrictions made it difficult to create and maintain Safari / Microsoft Edge test environments compared to the Chrome / Firefox browser environment.

For this reason, we realized that it was necessary to prioritize the execution frequency and the number of test cases to be executed by each browser, as shown in the pyramid diagram below.

You can download Microsoft WebDriver from the following page.

Please be aware that the installation method for Microsoft WebDriver is different for EdgeHTML between versions 18 and above and below 18. The Chromium version is still in preview stage.

Next, install Selenium WebDriver to Windows 10.

I recommend you install it via Chocolatey Windows package manager.

To register as a Selenium Grid Node on the hub, execute the following command:

"ms: inPrivate" capability allows you to open the InPrivate window and run tests.

When using the InPrivate window, browsing data (cookies, history, temporary files) will be deleted when the browser is closed.

It is recommended that this capability is enabled in order to eliminate unexpected dependencies between users, such as login status.

Challenges in the test environment

By following the above steps, we can run Selenium WebDriver tests on Windows 10 / Microsoft Edge.

At first we tried running these tests on a Windows PC that we had, but we soon faced several challenges.

The first challenge was execution time.

We could tolerate slow executing tests to a certain degree, as we did not need to run tests on Edge as frequently as other browsers like Chrome.

But ideally we wanted to keep the total execution time within 30 minutes.

We also felt that as we increased the number of parallel executions, maintaining more than one physical machine would become an issue in the future.

The next step then was to create the test environment in the cloud using Azure DevTest Labs.

Azure DevTest Labs is a service that enables provisioning and management of virtual machines as a development / testing environment.

You can create a project (laboratory) and launch a VM by selecting the image (currently Windows 10 Pro, Version 1903) in MarketPlace.

Azure DevTest Labs also has the feature to share the same public IP address with the VMs in the lab.

Finally, we created an environment where we could conduct 5 parallel tests of the Microsoft Edge browser on Azure DevTest Labs.

As a result, we were able to shorten the execution time from approximately 2 hours to 30 minutes or less.

Cost comparison with other services

Azure DevTest Labs service itself is free to use.

In addition to that, Windows licenses come for free when you use Azure DevTest Labs for development / testing purposes.

Therefore, charges for using Azure DevTest are usually limited to Azure resources such as Virtual Machine.

We felt that below VM sizes were enough to run Selenium WebDriver tests with Microsoft Edge browser.

And finally, Azure DevTest Labs has the feature to automatically shutdown VMs when they are no longer used, as well as automatic startup when resources are requested.

This will allow us to run the VMs only when wanted the test to run, thus reducing costs.

There are SaaS such as SauceLabs / BrowserStack, which provide Microsoft Edge test environments in the cloud.

Here are some of their benefits so you can choose accordingly.

Benefits of creating an environment with Azure DevTest Labs

In this article, I described how we deal with UI test automation (Selenium WebDriver) with Microsoft Edge browser, and how we create its environment using Azure DevTest Labs.

Previously we thought that creating testing environments for Windows 10 / Microsoft Edge would always be much harder, but Azure DevTest Labs made it relatively easy to do so.

Testing on Windows 10 / Microsoft Edge is still harder to do compared to using Chrome / Firefox. But for now we workaround these issues by controlling the frequency and the number of test cases that are run in these browsers.

This time, we used Azure DevTest Labs solely for the purpose of browser testing, but it can actually be used for other testing automation purposes.

For example, it is also possible to create a test automation environment for Windows App using Appium and Azure DevTest Lab.

I will continue the challenge of building a test environment that is more stable and faster.